325 years after Salem, America still has work to do 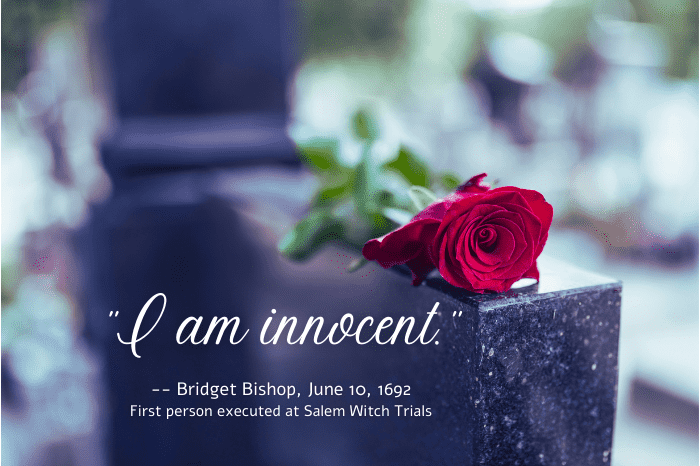 Many modern witches struggle with how to stand in our personal truth, and whether to “come out” to friends and family about our spiritual identity. For me, I decide on a case-by-case basis. A person has to earn my trust and the right to know more about me. I don’t lie about myself. I just don’t share everything with every person, because I don’t want to defend who I am. I pick my battles. Is it worth it to wear a Flavor Flav clock-sized pentacle to Thanksgiving dinner with extended family? Nope. Likewise, if everyone else at the table voted for the other candidate, I’m not slapping my candidate’s bumper sticker across my forehead. Not if I want a peaceful holiday.

But it’s not just me. If we look closer, these “outsider” feelings can be traced back to the witch trials.

It is common knowledge that innocent people were brutally executed, not just in 1692 Salem, but all over Europe for centuries, based on the allegation of witchcraft. Witchcraft was the catch-all accusation, perfect for doing away with someone who stood in your way, especially women. It was slut-shaming, victim-blaming, “she’s not like the rest of us” at its worst. It was a common way to get your hands on the land owned by a widow or fatherless daughter, ensuring women wouldn’t have political power. There was rarely a way to disprove the claim, especially when those in control sought to heroically rid society of sinners in order to keep their positions of authority.

I especially appreciate the conclusion of historians Paul Boyer and Stephen Nussbaum:

They examined church records and legal proceedings that revealed a grudge-match among the villagers over the selection of the minister and a split between Salem Town and Salem Village. In fact, twelve out of the fourteen accused witches who lived in the village resided on the east side and likely favored the split, while thirty out of the thirty-two accusers resided on the west side and opposed the split. (Davidson & Lytle, 2005)

That's right. Innocent people were executed because of a twenty-year political power struggle between the east and west sides of the village.  A line down the middle of town.

If we’re honest with ourselves, 1692 wasn’t the last time a group of innocent people were accused of some kind of wrongdoing, held up as scapegoats in a divisive social or political issue. It happens daily. Just look at rape survivors. Unfortunately, they’re often on the receiving end of slut-shaming and victim-blaming. Assumptions abound about their character, appearance, and decisions. Throw in a rich, famous, or powerful rapist and it’s too often game over for getting any justice.

Imagine if we began accusing all the tall people of theft, simply because they are tall and for no other reason. You can’t trust them because they’re so tall. Watch out! We should ban them all from travelling here, because those tall people are the truly evil ones. We should round them up and keep our eye on them. Beware!

When you insert race, gender, sexual orientation, class, political party, education... you arrive at the “us vs. them” mentality in present day America. The truth is, everyone wants to belong, yet too often we try to do that by excluding others. As soon as we compare ourselves to others, we begin to lose our way. The bombardment of shocking news, internalized capitalism taken to the extreme, and vitriol of socio-political divisiveness can be soul crushing.

What can we do about it? How can we stop allowing powerful people to profit from suffering by exploiting our biases and differences?

How do we stop the line from being drawn through town again?

We listen. We remember our childhood curiosity and wonder. We look for ways to disprove our biases by finding what we have in common. We seek what makes the world a kinder place.

Most importantly, we practice empathy.

We invite neighbors over for a cookout. We travel. We learn a second language, and then realize how difficult it is to speak it fluently without our own native accent. We try new music, food, and art. We volunteer to help the most vulnerable in our community. We join civic groups so we can meet people with diverse perspectives who still agree on common social good. When someone reveals their favorite song, we stop what we’re doing and really listen for their connection to it.

Empathy funds education so equally that every person has the same opportunity to thrive based on their talent and interests, rather than their postal code. PreK all the way to college and vocational training.

Empathy provides universal healthcare so that no one goes bankrupt because they got sick.

Empathy pays a grateful, living wage instead of pocketing the profits while your employees struggle from paycheck to paycheck, because without them you wouldn't have a business.

Empathy is the act of knowing that every person wants to be seen and heard.

Empathy stops the line from being drawn through town.

Empathy is a higher calling and a connection to what makes us alive.

Empathy is our greatest superpower.

About the author
S.F. Skyheart

Blog is for inspirational and entertainment purposes only.